Back to the Words zone 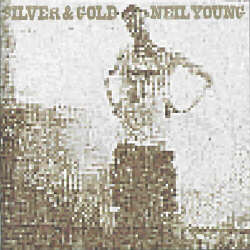 Reviews of the album...
Silver & Gold

Neil's own comments about each track of the album.

Just thought I'd offer a preview of the upcoming Neil album for those of you anxiously waiting. First off, I should mention that my impression of the album as a whole is that it's much "happier" than the solo versions from the '99 tour, etc. The drums and additional instruments really add a lot to the songs for the most part. Silver and Gold and Without Rings are the only completely solo acoustic cuts.

Good To See You   (2:46): This recording must be old, it has the ""Bridge '97" intro, complete with harmonica and some type of gong-cymbal sounding thing. Acoustic guitar, drums, vocals. Pedal steel comes in on the first verse, very very nice. Sounds very jolly and bouncy, for lack of better terms.

Silver & Gold   (3:12): I was hoping this would be a full band cut, but I'm just happy it's finally released! Very beautiful song. Sounds basically like the solo versions of late. Just Neil and his guitar (and a harmonica, of course). Perhaps a tad disappointing for a song with such a long legacy, but it's still a fine version of a great song.

Daddy Went Walkin'   (3:57): Starts out very briefly with Neil solo/harmonica, then the band comes in, and provides what is possibly the most amusing backing on the whole album.. the bass does a little country jig, the pedal steel does its thing, the drums start playing a ragtime sort-of beat... I kept expecting to hear someone blowing on a jug. Neil even does a little fake blues harmonica thing between verses. Whoever plays drums on this (is it Keltner?) has a marching drum sort of thing going on. There's dobro, and organ? Lots of instruments on this one. I like this recording a lot, there's lots of flavour. Very bluegrassy, if y'all don't mind... someone is doing back-up vocals on this, might just be Neil double-tracked though.

Great Divide   (4:25): Intro sounds a lot like Dreamin' Man (rhythm, chord progression -- though I know it's not the same chords). Actually, the chords are reminiscent of Name of Love. In fact, I keep expecting CSN to chime in after each line of the verse. Drums, bass, acoustic guitar, pedal steel... A very light pump organ. This is miles and miles better than the single live performance. Short pedal steel solo. Has a fade ending (very rare for Neil).

Horseshoe Man   (3:58): Not one of my favorites from the recent batch of new tunes, this one almost immediately redeems itself with a band backing. I'm pretty sure Spooner (I assume) plays some extra piano on this (a la Such a Woman). Drummer must be Keltner, he does the same stuttered beat on this that he uses on Out of Control, but it actually works here. Great pedal steel cues on the chorus. Great accents on the bridge (beautiful vocals, by the way). Grrrrrreat!

Red Sun   (2:45): Again, not a previous favorite. I still think it's rather weak. I also think Railroad Town would be a better title. Nice pump organ. This seems to be the only song with female back-up vocals (is this Linda or Emmylou or both?). There's a dobro or pedal steel here too. Percussion is limited to a minimal tambourine. Now, there's a strange sounding instrument on the bridge that I can't place. There's also a very light snare drum... It sounds like something you'd expect to hear from the Master Musicians of Jajouka. It's almost fiddlish, but with a more liquid tone... Hopefully the CD liner will say what it is.

Distant Camera   (4:07): Now we're talking. I loved this on the solo tour and like it more now. He swaps the order of the opening lyrics though, it's "The flash of a distant camera.." first, then "Pieces from here and there...". Acoustic guitar, bass, drums. Pedal steel comes in on the chorus. My only objection about the percussionist on this record (must be Keltner...) is his overuse of the snare drum -- you'll see what I mean. Must've been a military academy drummer (not that he's bad, because he's not -- I think he sets a fine beat for the most part). Pedal steel through-out 2nd verse. "Song of looooove..." During the outro, the bass hits one note too early, which always jumps out at me, but once Neil's haunting vocals take over, it really doesn't matter anymore.

Without Rings   (3:39): I loathed this song at Bridge '97 and protested loud and clear (uh, to myself...) when I heard it'd be the closing track on this highly anticipated album. However, it doesn't completely suck... Encouraging, aren't I? I actually, really like how Neil's "low" voice sounds on this cut -- quite creepy. I still think "I'm looking for a job, I don't know what I'm doing, my software's not compatible with you" is a terrible lyric, but I'm sure he had some clever reason to use it (I'll just keep telling myself that). In all honesty, though, it's not a half-bad closer, though this and Red Sun are the low points of the album for me.

The only other disappointment is how short the album as a whole is! 40 minutes or so (38:41 if you must know, though you can tell 'tween-track time has been cut on this..um..'promo'), which I guess isn't all that short afterall.. but it just feels like it goes by too quickly.

The negative comments I've read about this album so far are grossly overstated. I can't wait to hear the CD officially, without the tonal imperfections of the "promo" version that just finished its final spin in my stereo. Fear not, Young fans -- he still reigns supreme.

After hearing the promo copy of Silver & Gold, I thought I would share my opinon. First of all, let me say I thoroughly enjoy it. I have to admit, I had really high expectations after the solo tour, and really wondered how these songs would sound with full instrumentation. When I listened to it for the first time, I thought to myself: "If I had never heard these songs before what would I think?". Let me tell you, I was impressed.

I am not the most musically inclined, so I can't really comment on whether the playing was perfect or not. But here is a very brief song-by-song rundown:

All in all, I think this is an excellent album. Those of you who have an image of the 99 tour comp songs, try not to think about the songs that way when you listen, and I believe you'll be quite pleased with what you hear.

I am anxious to buy the official release to see if anything has changed since this promo. IMO, it's better than Harvest Moon, but it would have been nice if it had included some guitjo!!

Back to the Words zone