Back to SAMPLE and HOLD
Tour-Related Rumors, Snoopings, News Releases

The newest report comes first. Scrolling down takes you backward through time... Note that much of this report is drawn from the Rust List, so some of it may not make a lot of sense when taken out of that context. Subscribe to the Rust List to get ALL of the info...

Regarding the Mohegan show, Jim Koplik, who handles all the concerts in the area for Clear Channel, confirmed on the air (WPLR in New Haven) that Neil IS playing the Mohegan Sun on 6/28. After Mike Labatino indicated then that Pollstar no longer listed a Neil appearance at that venue, Koplik responded with: "Neil Young - Mohegan Sun - June 28."

This just arrived in my inbox....

We thought you should know that Neil Young has announced an extra London show at the Carling Apollo Hammersmith on Saturday 17th May 2003.

The Mohegan Sun lists Sammy Kershaw on their schedule for June 28th, the date Neil was supposed to be there.

In a TV program on Canal 33 TV from Catalunya, they said that in September Neil Young will play at the Forum Of Barcelona in Catalunya, Spain. Aleluya!

Looks like Neil really is coming to Austin! Just got this note from "Direct Events": 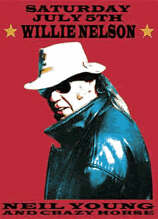 Willie Nelson's Fourth of July Picnic is a Texas tradition. The event attracts people from around the state and around the nation. After a two-year hiatus, this year's event has evolved into a two-day festival and the booking of legends The Dead and Neil Young to share the stage with American icon Willie Nelson.

Sorry MacRusties, I just got some sad, sad news about the rumored Glasgow show:

Regarding the shows announced "without further details", in Denver the Rocky Mountain News announced that Neil will be playing at Red Rocks on both July 29 and July 30.

HyperRust Editor's Note: Keep up with the details about these shows here and here.

The Austin American Statesman reports that Willie's "Picnic" (concert) this year will be two days long, July 4th and 5th. They're claiming that the lineup includes The Dead, Neil Young, Beck and Toby Keith.

Since Neil will be in New York on the 4th I would imagine getting the Horse's gear down in a day would be hard. But he does not have another show scheduled until the 16th, so I suppose this is within the realm of possibility,

A solo show perhaps? Official announcement should be "next week".

According to this story about Willie's 70th birthday and his plans for this year...

Nelson remains passionate about Farm Aid, which has raised $15 million for family farmers since it began in 1985. He says small farms are failing at an alarming rate. "A lot of people say what's the use of doing it (the concerts) if it's not doing any good," he said. "But I like to think we're calling attention to it every time."

This year's concert is still in the works, but Nelson says it will be in the San Francisco area in the fall.

In addition to all previously announced shows, these two shows have now been announced:

At this point, these are the remaining cities from the original tour press release that have not had show details announced: RE*AC*TOR Date: Mon, 07 Apr 2003 15:24:57 -0400    Tour Watch 2003
Reporter: ANDREW GRAY <awgrayarea@msn.com>
Topic: Pittsburgh details

According to a press release I just saw, the Post-Gazette Pavilion at Star Lake show is official:

Andy Gray
Out on the Main Line

I read in the Minneapolis Star Tribune today that tickets go on sale this Saturday for a June 20 Crazy Horse show at the Target Center.

Regarding the shows announced "without further details", in Chicago WXRT just announced that Neil will be playing the United Center on June 17.

Three more Crazy Horse dates/venues have been added to those previously announced:

My friend says he had heard on a radio station that Wilco and The Flaming Lips were opening up for part Of Neil and the Horse's tour this summer.

Erik, Oakland
"After the next goldrush"

A number of shows have now been announced by various sources (venues, Clear Channel, etc) and some have tickets going on sale right away. There are also some cities that have been announced with no further details yet. Here's an update...

Other announced/scheduled shows not previously announced:

And the following new cities have been announced, without further details:

For those still anxiously awaiting news of the potential Glasgow and Sheffield shows, the latest is that they are both still very much possible. I'm hearing that there is no longer "a problem with venues", and it is expected that a final decision will be taken this week.

The decision would appear to be in Neil's hands. We need the power of some positive thinking from all UK rusties to make these shows happen.....

Regarding the rumor I reported a couple of months ago, I just got a e-mail from a very reliable source that the boys will be at the Mohegan Sun Arena on June 28. No word on tix, but I'm sure it will be soon.

Good place to see a show, 10,000 seats all with very good views. Who knows, you bring an extra 40 or 50 bucks to play with in the casino and the whole night might not cost you anything. Be quick, I'm sure tix will sell out quick.

An earlier report contributed some wisdom on Bonnaroo, and I'd like to add my $.02 worth. Much of what was says is true, such as there only being one road in. I waited in traffic for roughly 3 hours last year.

I am assuming that if people were only going to see Neil they won't be camping, but if they are, campers are the ones who REALLY have to wait. There were some 12+ hour waits last year, I heard.

But I wasn't camping, and once I got to the festival, parking was not a problem... I pulled up, parked, and went to the stage I wanted. And departure wasn't a problem either -- I drove straight out. Of course if one was to be there until the last act finishes on Sunday, it will be brutal. The campers pulling out kill the flow of traffic.

About Neil's show, he'll basically be the only one playing on the main stage, probably 7:00pm-ish. They will allow him as much time as he wants. Bands played until 4AM last year, so it is going to be totally up to him to see how long he wants to go.

Good luck to everyone...

Today's L.A. Times reports Neil and The Horse will be at The Greek on July 22 and 23rd! Opening act is Lucinda Williams.

HyperRust Editor's Note: Keep up with the details about these shows here and here..

The venue website for the Toronto show says that Lucinda Williams is special guest at that Neil concert on June 23rd!!!

Got this message from an anonymous source...

Regarding the potential Sheffield show -- it was tentatively scheduled for the 15th, at Sheffield City Hall. It is up in the air at the moment, as Neil may have to fly back to the States at that time. So Sheffield and Glasgow may not happen. They are still trying to find a new date if he has to fly home, though.

My friend works for State Farm Insurance in the Saratoga Area, and their company is a sponsor at the Saratoga Performing Arts Center. He just got order forms for Neil at SPAC, on July 4th. The ticket prices were listed at $79 and $54 inside and $24 lawn.

Today a Neil Young and Crazy Horse show in Toronto, at the Air Canada Center, was announced. Tickets will go on sale next Monday for a June 23 show.

WDET radio in Detroit today announced that Neil will be at the DTE Energy Theatre on Sunday June 22. Tickets will be going on sale soon.

From Billy's news column on the Billy Talbot Band website...

Back to SAMPLE and HOLD